Today, I am thrilled thrilled thrilled (super-geeked... you got that, right?) to share a bit of time here at Fangs & Broomsticks with my good friend, Grant Ansert, to discuss his debut novel, The Mirror Man. 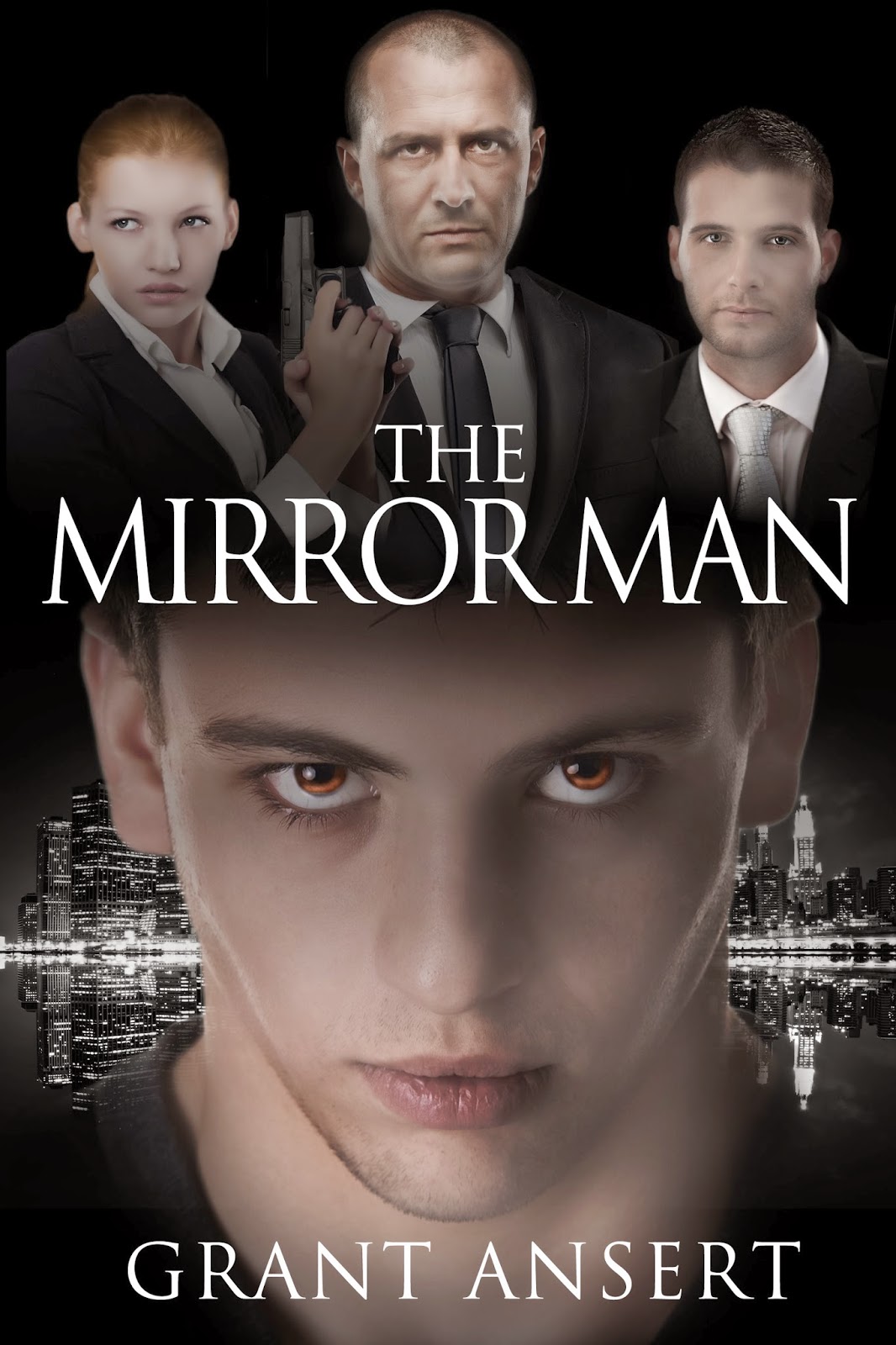 NYPD Detective Andy Thomas is called to investigate the death of a rapist in an alley. During the course of his investigation, he discovers that the death of the rapist has no medical explanation. Soon after, he is joined by FBI Special Agent Veronica Baldwin who has been investigating a series of similar deaths for the FBI for the past two years. As Andy and Veronica begin to close in on the suspect, nicknamed "The Mirror Man", they learn that another very evil man named Hesam is also pursuing the Mirror Man and plans to kill him if he catches him. As the investigation intensifies, Andy and Veronica learn that, although the Mirror Man was involved in the death of the rapist in the alley, he is in fact not guilty of any crime because he is an innocent pawn of Hesam. So Andy and Veronica have to make a choice. Do they do what is expected and watch the Mirror Man fall into the hands of Hesam? Or, do they do what's right and risk everything to help the Mirror Man gain his freedom?

I am also privileged to feature Grant's first official interview. Settle in with your Witch's Brew - this is good stuff...


What came first, the title or the novel?

The idea came first. Usually, I get a central interesting theme or concept that I think will be interesting to readers and enough to carry several hundred pages of text. In this case, I thought of an extraordinary yet ordinary man who had a supernatural power to reflect the evil from a person’s heart back into his/her own heart. That concept brought about the title.

What inspired you to write The Mirror Man?

I am an avid people watcher (in a hopefully non-creepy way). I love going to malls, sporting events, and other large gatherings and watching people to see how they act, maybe even guess about their background. One day in mall here in Indianapolis, I took a seat on a bench with the other “Mallcontents” (the husbands who sit and await the return of their wives from shopping in a store- this is my favorite Sniglet, by the way) and began watching people walk by. Out of the corner of my eye, a lone man caught my attention. He had a coat on and a backpack strapped securely to his back. He walking along the periphery of the mall, shoulder practically brushing against the wall. I thought, Here’s a man in a very public place looking to stay anonymous. I began to wonder what his story could have been. By the time I was on the trip home, I had already thought up the storyline that perhaps he was a man who had something to hide and held an ancient secret. Within a few weeks, the story had taken shape and I was off and running.

Do you identify more with any one particular character in the story?

Anyone who knows me can tell just how much of me is written into my NYPD detective. His sense of humor, his rapport with other characters, and his peccadillos are all very much my own. However, I most identify with Mihalis, my Mirror Man. In so many situations, there are times when we feel trapped by circumstances, yet we try to make the best of what we’re given. One of the greatest compliments I’ve received as an author is when someone who has read my story tells me that Mihalis is their favorite character because of that reason.

What is up next for you?

Immediately, I plan to release the sequel to The Mirror Man this fall. The title is The Healer. I hope to release the third book in the trilogy, called Hologram, near Christmastime. During that time, I have two children’s/young reader books, Jeremiah & The Junk Shop and The Amistad Plant, which I plan to release. And, over the next 2-3 years, I have two other stories, Jesse’s Promise and The Contest, which are in various degrees of completion that I hope to finish and publish.

What is the one thing that helps you the most in your writing process?

The motivation to write stems from a need to escape from the worries/anxieties/responsibilities of life. I have a beautiful life, a wonderful family, a job I love, and friends and family who love me very much. However, we all need ways to get away and relax. And since I’m not much of a “Calgon take me away!” kind of a person, writing is my release.

I am in love with the book I Heard the Owl Call My Name by Margaret Craven. She is a Pacific Northwest author, and since I am from Washington State (GO BREWSTER BEARS!) I had a college professor assign the book as required reading for an English class I took. And, my life has been changed for the better ever since. The book is about a Catholic Bishop who learns that a young vicar of his has terminal cancer and does not yet know of his diagnosis. Rather than send the vicar to a hospice somewhere, the Bishop sends the young man to his toughest parish- a Native American village in a very remote region. Within moments of meeting the vicar, the Native Americans sense what is going on (though they’re not told in advance) and begin the process of preparing the vicar for his eventual death without him knowing about it. The book does such a wonderful job of showing death in a different light from how so many other people view it. I often purchase the book as a gift for friends and family experiencing grief after the death of a loved one. Now, every time I pick up a book, the best that book can hope for is to be the second best I’ve ever read.

Stephen King. No question. He gets a bad rap for his stories. He is seen by some as being a “weirdo” who writes strange stories. But, if you think about it, so many of his stories are regular life with a supernatural twist (mine are much like his). Think of how many books he has sold over so many decades of writing. Only quality authors can pull that off. He stands up for those of us who enjoy fiction. And, consider his impact on entertainment and society; Carrie, The Shining, Misery, The Green Mile, Stand By Me, The Shawshank Redemption, and many others. I’m a big fan. Keep it up, Stephen!

All that authory-stuff aside, we must get to the very most important details that we care about here in the Realm. Favorite Dessert?

Sorry to get all mamby-pamby on you, but it’s a tie. No sane person could decide between my mom’s apple pie and freshly-baked brownies with a huge scoop of vanilla ice cream melting on top. I mean, come on. Would you choose?


I have to say I’m a big ol’ member of the Lollipop Guild.

We love Flying Monkeys here in the Realm, but we will still be your friend. Congrats on your debut release!

You can connect with Grant and find his books here:

The Mirror Man on Kindle

The Mirror Man on Nook

The Mirror Man in Paperback